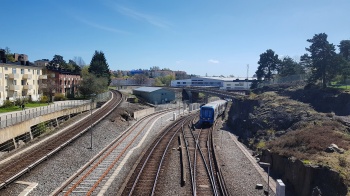 Hello, friends! And welcome to our 100th entry in the journey of Stockholm Subway StoRy. The 100th week in our project catches us having a look at Skärmarbrink, in the southern part of the Swedish capital. Join us!

Skärmarbrink is located on the green line (T17, T18) between Gullmarsplan and Hammarbyhöjden, respectively Blåsut. It opened in October 1950 and for almost eight years the station used to be called “Hammarby”.

If in the beginning was part of the original subway line in Stockholm, today is an important subway hub for the south-eastern part of the city, at almost three km away from Slussen.

Skärmarbrink has only one entrance, from a bridge suspended above the tracks. The entrance leads to the two large outside platforms, which are serving the two green lines passing by here. It’s also worth mentioning that next to the station there is a depot for the subway trains.

The artistic decorations in the station, namely the bronze statues on the platforms, were made by Carl Magnus in 1990. And these are admired on a daily basis by a bit more than 5.000 passengers that visit this station. 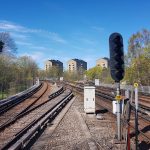 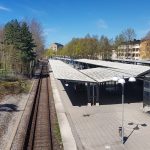 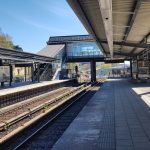 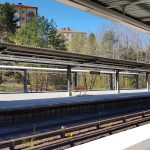 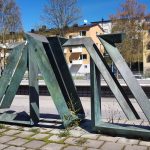 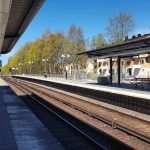