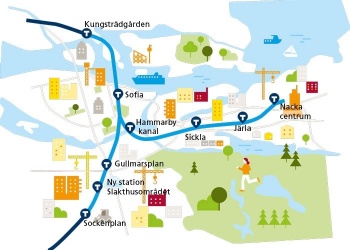 Even if we feel that 2017 just started the other day, here we are in the first Sunday of March! So, it’s time for another entry in our Stockholm Subway StoRy. Today, we are going to talk about the future of the blue line, as a continuation of this article regarding the new yellow line. Here we go.

As you learned from the previous article on future development of the Stockholm metro, there are going to be four lines serving the network in the Swedish capital in the near future: blue, red, green and yellow.

There are three major changes involving the blue line in the future. First, the end at Akalla will be expanded further to the west with two new stations: Barkarbystaden and Barkarby station. Here you can see where the new stations will be constructed.

Further, the end from Kunsträdgården will extend towards Nacka with the following stations: Sofia, Hammarby kanal, Sickla, Järla and Nacka centrum.

On the other hand, there will be an expansion from Kungsträdgården also towards the southern part of the city, going through the new Sofia station and connecting with the current green line all the way from Gullmparsplan to Högsätra. Enskede gård and Globen stations are expected to be demolished.

Follow our updates on the project’s Facebook page (Stockholm Subway StoRy) and check out our blog every Sunday for a new post regarding the Stockholm subway. Be a part of the StoRy!