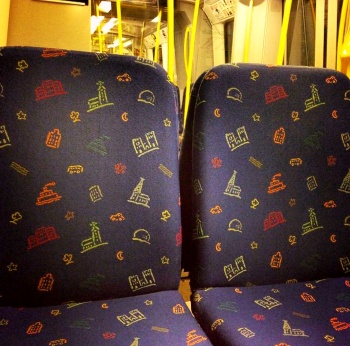 This week our stoRy from the Stockholm subway comes on a Monday, just because we’ve been out there all weekend to gather even more information useful for you and your future visit in Stockholm. Today we are sharing a part of it in our second post in the series dealing with questions and answers. Here we go!

What do the symbols on the chairs represent?
– If you’ve been inside one of the new modern trains transporting people in the subway system of the Swedish capital, you surely have seen the intriguing symbols drawn on the chairs, as the picture above depicts. What do they represent? Landmarks of Stockholm! For example: the Ericsson Globe, the City Hall or the King’s Towers (Kungstornen). Try to identify them!

How many stations are out there?
– The subway in Stockholm has a total of 100 stations! 46 of them are under ground. 90 stations were decorated by artists between 1956 and 2003. Also, there is one station which has a fantastic story and was never opened; Kymlinge.

How many lines are in total?
– Nowadays, there are three main lines: blue, red and green. The blue line is formed by T10: Kungsträdgården – Hjulsta and T11: Kungsträdgården – Akalla. The red line is made out of T13: Norsborg – Ropsten and T14: Fruängen – Mörby Centrum. While the green line is composed of T17: Åkeshov – Skarpnäck, T18: Alvik – Farsta Strand and T19: Hässelby strand – Hagsätra.

Were the lines the same in the past?
– No. There were many changes regarding the lines of the subway in the past. For example, the subway started as a tram service in the central part of the city, with Slussen being the oldest station. Here (is a plan of the Stockholm subway in 1965. Read more about the future here and here and find out which changes are coming!

What is the greatest view you can get during a metro ride?
– One of our favorite views in the Stockholm subway is definitely on the green line between Alvik and Kristineberg. Here is a snap of it. Impressive, right?

What type of tickets are there?
– We have written a detailed article on the types of tickets you need while traveling in Stockholm. Read it here.

What happens if I get fined for not having a ticket?
– You need to have a valid ticket while using the public transport in Stockholm! Note that you cannot buy tickets on board of buses, trams, subway trains or light trains. Starting with February 2017, the people who cannot show a valid ticket on the public transport risk being fined with 1.500 SEK.

We’ll be getting back to our Q&A sessions as soon as we gather more interesting questions to find answers for! Until then, follow our updates on the project’s Facebook page (Stockholm Subway StoRy) and check out our blog every Sunday for a new post regarding the Stockholm subway. Be a part of the StoRy!