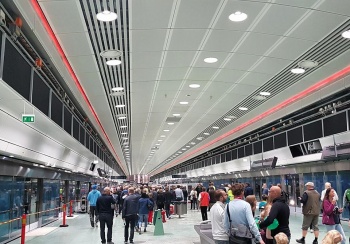 Hello, everyone! The Stockholm Subway StoRy is back again and this time we are presenting you one very special entry. Today we are going to talk about the new Stockholm City Line, which is going to open tomorrow. Yes! Tomorrow!

We talked here about the new Stockholm City Line last autumn. But now the big day is upon us and more information is available. We hope that you are as excited as we are about this!

The construction of the line started in January 2009 and after more than eight years of work, the project is finally open to the public. Even if the Stockholm City Line is not technically part of the subway system, we are addressing it because it will heavily influence the whole public transport system in the Swedish capital.

The new train service it’s 6 km long, 7.4 km including connections, and with it two new stations came into the picture: Stockholm Odenplan and Stockholm City, both connected to the older subway stations T-Centralen and Odenplan. Want to be the first to use the new train? Be at Stockholm City station at 5.00!

Once the service it’s fully open to the public, we will get back to it and present you its unique artistic decorations. So, keep an eye on your project’s Facebook page (Stockholm Subway StoRy) and check out our blog for new posts regarding the Stockholm subway. Be a part of the StoRy!