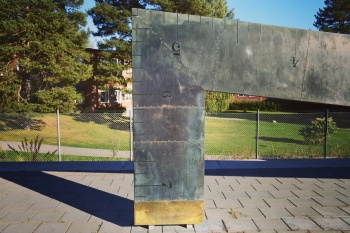 Bandhagen is providing today’s stoRy from the Stockholm’s underground. The 38th station in our series is located in the southern part of the city and serves the green line in the subway system. Bandhagen was opened in November 1954.

The station has one platform and two tracks alongside it. Almost 3.000 people use Bandhagen on a regular weekday. From the northern side, just before entering the station, the trains are passing on a viaduct, which raises above Trollesundsvägen.

The artistic decorations are made by the danish artist Freddy Fraek. The big rock in the middle of the platform was brought from Öland in 1983. Around it Fraek installed a huge ruler, which gives the illusion of moving through the station all the way to the entrance. The ruler is made of wood and it was originally painted yellow.  Later, in 1987 it was covered with a copper sheet.

Do you enjoy our stoRies from the Swedish underground? Follow our blog for a new entry every Sunday. Or like the Stockholm Subway stoRy’s Facebook page here. 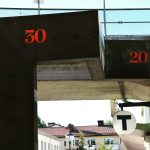 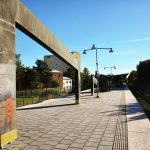 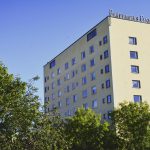 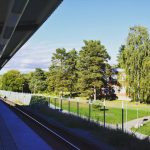 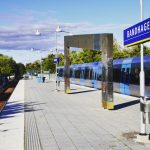 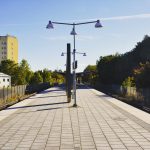