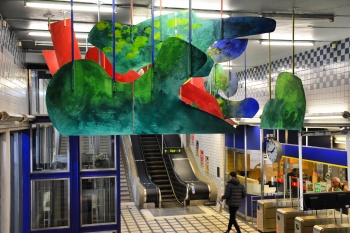 This Sunday brings the 45th entry in our Stockholm Subway StoRy – Farsta. Today’s station is located in the southern part of the city in a district which has the same name. Let’s go in a stoRy which started in the late 1950s!

Farsta was opened 58 years ago, in November 1958 and nowadays it’s the second to last station in the southern end of T18 green line, followed by Farsta Strand further south. Here, are two tracks along the large platform, which are situated on a viaduct above Kroppaplan street. The current structure dates from 1960, while the original station from 1958 was placed further north.

The station was the end station for its line until 1971, when Farsta Strand was opened. Nowadays, more than 10.000 passengers pass through this station on a regular week day, while 5.000 more use the bus terminal nearby, making Farsta one important transport hub in the area.

The artistic decorations here were made by Gunnar Larson in 1982. His work is called “Transformations in the sky” and he stated that has aimed to create a “summary” atmosphere with the paintings on aluminum sheets hanging from the walls in the ticket hall.

The fact that the station is placed on a viaduct, offers spectacular views, as you can see in the pictures below. And when one enters the ticket hall surely gets an unique feeling depicted by Larson’s work, a total change of scenery from the views you get from the platform.

Farsta used to be called Farsta Centrum. Learn more about the wonderful subway stations in Stockholm by following our previous entries here. Also, like the project’s Facebook page here for other Stockholm subway-related information. 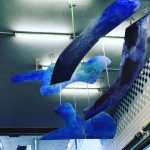 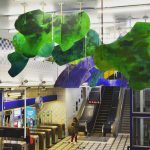 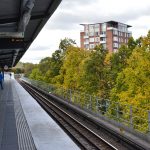 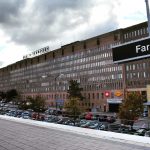 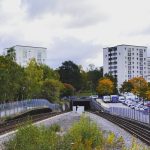 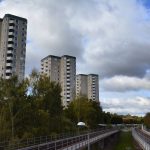