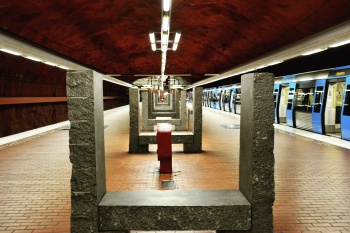 We are well into October now and the colder weather is slowly settling in. Nevertheless, our stoRies from the Stockholm’s underground are still coming towards your way. This week, we are going to talk about Skarpnäck, the newest station in the subway system.

Skarpnäck is situated in the neighborhood with the same name, in the south-eastern part of the Swedish capital, making it one of the ends of the green line, at more than eight kilometers away from Slussen. Its emplacement makes it the easternmost station of them all.

The station’s cave is placed at 25 meters underground and it was opened in the autumn of 1994, decades after most of the stations which are on the same line, T17. Being constructed in 1994 is still the newest station in the whole subway system and also the 100th station.

Further, Skarpnäck’s cave it’s the largest one among all the others in Stockholm. The red of the bricks give an unique feeling to the visitor, the color being specific to the surrounding neighborhood, as can one can see in the pictures below.

The artistic decorations here are made by the granite sculptor Richard Nona and it’s represented by 17 sculptures placed along the platform and other set of 17 sculptures installed in the hallway leading to the only exit. This minimalist setting is daily seen by more than 5.000 people.

Keep up with our stories. Follow our blog here for new entries on every Sunday or like the project’s Facebook page here for other Stockholm subway-related information. 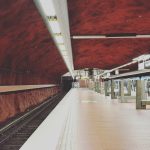 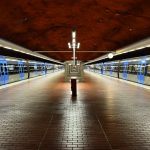 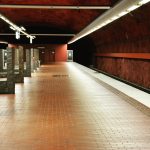 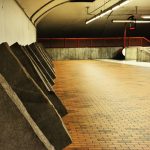 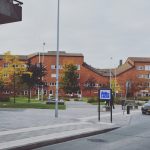 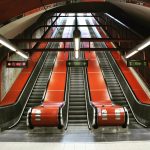