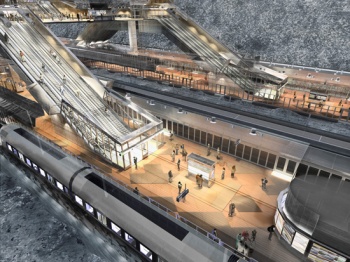 The Stockholm City Line (Citybanan) will be in service from mid next year. But until then, one of its two new stations – Stockholm Odenplan – will be presented for the first time ever this Sunday, on the 18th of September, between 11.00 – 15.00

The new line is planned to serve the commuter trains of the city, making more space for the regional and national trains passing through the regular and currently in-use line. The Stockholm City Line will have almost 7.5 kilometers, including the connecting parts.

A 6 kilometers tunnel will go right underneath the central part of the Swedish capital, starting just outside of Stockholm South station and joining the regular line after Tomteboda. Its construction started in 2009 and when it will be ready, will double the track capacity in Stockholm.

The project will bring two new stations in the city: Stockholm City Station and Stockholm Odenplan.

Stockholm City station will take the commuter trains traffic from the Stockholm Central station and it will be connected with tit and T-Centralen, making the transfer easier for the travellers.

Stockholm Odenplan it’s the second new station for the line and the one prestened this Sunday. It will take Karlberg station’s place and will add commuter train traffic to Odeplan area, after it already had subway lines.

At the presentation on Sunday the hosts will offer the chance to walk around the new station, view the art installed here and the technique used in the construction. Also, fika will be offered to the visitors. So, pay a visit to Odenplan for a sneak peek of the new line.

The project is constructed by the Swedish Transport Administration, the City of Stockholm, the Stockholm County Council and the Stockholm Transport (SL). See here a more detailed presentation of the project. And even more information, here.