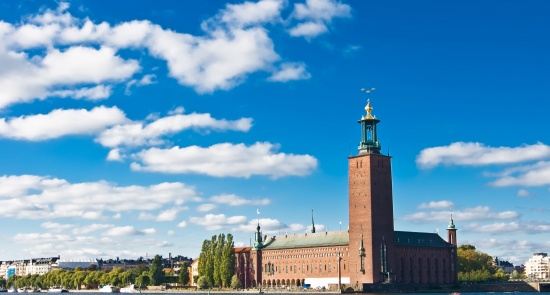 Stockholm Essential stoRy Tour™ with Vasa and the City Hall  gives you a fantastic opportunity to discover in only five hours Stockholm’s highlights: the Vasa Museum, the City Hall and the Old Town, Gamla Stan.

The City Hall is famous not only for its amazing architecture, but for also being the venue for the glamorous Nobel Banquet, held here each year on 10th December. During our guided visit to the City Hall, you will be able to take in its atmosphere and maybe feel like a Nobel Laureate yourself. On the way to our vehicle, you will have time to take some memorable pictures of the Södermalm island and its steep cliffs, as well as Riddarholmen island and Lake Mälaren.

On the way to the Vasa Museum, we will take a panoramic ride through the city to show you major attractions such as the Concert Hall (the venue of the annual Nobel Prize Awards Ceremony), the popular Kungsträdgården park, the Royal Dramatic Theatre and Strandvägen  Boulevard.

The Vasa Museum offers a thrilling story of the Vasa warship, built in Stockholm’s shipyards in the 17th century, which was the most splendid warship of its time. It sank on its maiden voyage in the port of Stockholm and was salvaged from the seabed 333 years later to become one of Stockholm’s main tourist attractions.

Stockholm Essential stoRy Tour™ with Vasa and the City Hall will conclude with a guided walk through the cobbled streets of Gamla Stan, Stockholm’s Old Town. You will be able to capture the sights along the way, such as the Royal Palace, Stockholm Cathedral, the main square, the city’s smallest statue, a Viking rune stone and the city’s narrowest alley. There will also be some free time (about 30 minutes) for souvenir shopping before we head back to the port or to your hotel.

Please note that we reserve the right to change the order of the tour due to official events, traffic or any other occurrences which are beyond our control.