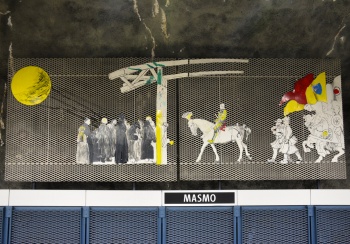 We are only two weeks away from Christmas and while dreaming of snowy days, today we are showing you the stoRy of Masmo, a subway station opened in October 1972 and part of the district with the same name within Huddinge Municipality, in the south-western part of Stockholm.

Masmo serves the red line T13 in the subway network of the Swedish capital. Towards the north-eastern end of the line Masmo it’s followed by Vårby Gård, while on the southern end of the line comes Fittja. Being far from the city center, the station has only around 2.000 visitors on a regular working day.

What is unique about Masmo it’s the fact that it represents one of the first “cave stations” in Stockholm, being placed under the mountain with the same name at more than 20 meters underground. There is only one ticket hall, one large platform and two tracks alongside it. Plans for expansion were partly executed, but those parts of the station are not in use.

The artwork here was made by Staffan Hallström and Lasse Andréasson under the name “Bring the Sun into the Underground”. Their work represents a innovative idea by making a living environment into the subway stations through installing changeable metal sheets on the cave’s walls. This setup allowed the installment of such pictures as “The Entry of Gustav Vasa into Stockholm” by Carl Larsson, which was edited by the artists.

Just outside the entrance, at the end of the tunnel, the Municipality of Huddinge ordered the creation of an art project in order to make the area more lively. The installment was made by Andres Kling from Land arkitektur. The project was finished in 2015 and it’s represented by 40 colorful sticks, giving a surreal feeling to the area.

Keep up with our stoRy by following our blog every Sunday, here. Also, like the project’s Facebook page for more information regarding the Stockholm’s underground. Watch our social media profiles for a coming contest in the second part of December! 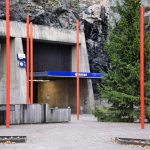 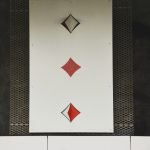 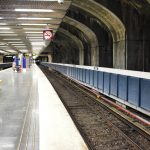 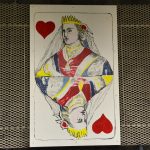 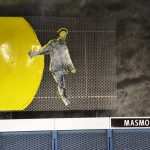 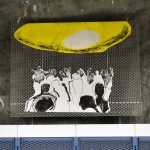